Stable and well-paid but extremely hard to get – government jobs have long been coveted in Iraq, promising pensions and family benefits. They have for many been the only employment option.

On Saturday, however, Finance Minister Ali Allawi, formerly a consultant for international financial institutions including the World Bank, repeated a warning that economists have given for years but that has been seldom mentioned by Iraq’s leaders: the country’s oil revenue could soon be unable to support state employees.

We can look at the increase in population of around 800,000 annually as a burden on the government, but I prefer to look at it as a human resource for the government

Many civil servants could be laid off in 10 years’ time, based on a projected decline in oil revenue amid a global transition to clean energy, Mr Allawi said.

But there may be a silver lining to this bleak prediction.

Demoralised by rampant corruption in government and the overblown salaries of senior officials, young professionals are looking to join the private sector.

Iraq has a burgeoning start-up scene, while new working trends, including remote work and outsourcing, are giving others a chance at landing informal contracts, even if only part time.

Ammar Saleem, who graduated in 2016 from the college of Management and Economy at Al Mustansiriyah University in Baghdad, decided to search for a job in a booming market after three years of unemployment.

He landed an auditing job at one of Iraq’s new online stores that compete with brick-and-mortar shops, working from home for a monthly salary of about $800 – a competitive paycheque compared with many public sector jobs including teachers and policemen.

“Iraq is witnessing a strong growth in e-commerce, which is still at an early stage compared to the rest of the region, but it’s very promising,” Mr Saleem told The National. “It’s tough finding a government job nowadays.”

For generations, many livelihoods in Iraq have depended on the public sector – jobs supported almost entirely by oil revenue. More than 90 per cent of annual revenue from crude sales fund the state budget.

Combined, the beneficiaries of state payments comprise about 17 per cent of a population of nearly 40 million. Youth unemployment stands this year at 36 per cent, the World Bank reported, with 2.5 million unemployed Iraqis urgently in need of jobs.

Meanwhile, the private sector is picking up steam as it currently makes up between 40 to 50 per cent of jobs – a testament to Iraq’s struggle to reform and recover from four decades of dictatorship, international sanctions, a US-led invasion, sectarian violence and the war on ISIS.

Many of those lucky enough to have a private sector job, however, are underemployed, working long hours for low pay, on a temporary basis.

Protesters clash with an Iraqi riot police vehicle during a demonstration against state corruption and poor services, between the capital Baghdad’s Tahrir Square and the high-security Green Zone district. AFP

‘The twilight of the public sector’

“I can see the twilight of the public sector as we seek to diversify our economy,” said Mr Allawi, the finance minister, at a televised seminar, during which he gave warning that the clock was ticking for Iraq’s bloated state.

Panicked employees, already reeling from a recent devaluation of the local currency and surging consumer prices, say the minister’s statements do not bode well for their future.

“They [the government] want to impose taxes and remove subsidies, and now warn us that our jobs might disappear in the not-too-distant future. This will make our jobs useless,” fumed Ali Al Mahdi, a 37-year-old employee at the Ministry of Environment, who has a bachelor’s in chemistry.

Successive governments in Iraq have failed to enact even small tax reforms that would affect government employees, while subsidies for sectors that report heavy financial losses, such as the failing electricity sector, are high.

Each move towards reform that could bring vital funds back to the government has been met with protests.

This dynamic of one step towards reform, two steps back, and the concerns of Mr Al Mahdi could soon worsen due to world events.

A steady shift worldwide to renewable energy is pressuring policymakers in Iraq to start finding realistic ways to decarbonise the economy.

Iraqi economist and financial expert Mazin Al Eshaiker, who has advised the government on monetary policy and has managed major companies in the telecommunication sector, says that the public sector will not completely disappear but is no longer fit for purpose.

“In my proposed plan, called ‘Iraq Revival Economic Programme’, Iraq will create the Development Board, which will be managed by an independent board of directors and audited quarterly by an international accounting firm [to prevent corruption],” he says.

“The Development Board will be the magnet for job seekers that will convince civil servants to submit their resignation from their low-paying government jobs in order to enlist in millions of more lucrative private sector jobs brought to Iraq by the Development Board,” Mr Al Eshaiker told The National.

He prefers to look at the increase in population of around 800,000 annually from a different perspective.

“It isn’t a burden but rather a human resource for the government. In other countries in the region, governments seek foreign skilled workers to move into their countries to help in the development process.

“In Iraq, the next government should have a clear plan to educate and train the next generation in order to steer them into skilled jobs instead of becoming a burden on the state, which might lure them into joining gangs, mafias or militias.”

It is not only hard to find a government job vacancy in today’s Iraq: government employees have also suffered in recent years.

Corruption is also one of the drivers of the street protests that kicked off in October 2019, calling for an end to bribery, mismanagement and unemployment. In the crackdown, security forces killed about 600 demonstrators and left tens of thousands with life-changing injuries.

Earlier this year, an investigation by The National exposed a corrupt employment scheme at different ministries in which officials recycled vacant posts with temporary contracts among desperate graduates in return for bribes that amounted to $10,000 for a job at the Oil Ministry.

No sooner had they started the new job than they got fired in the probation period. News of such scandals could be a further deterrent to Iraqis seeking public sector work.

Covid-19, and the trend towards online retail and working from home, is also driving change.

Mr Saleem, the auditor at an online store with an entrepreneurial mentality, has given up on the idea of his dream job at the Ministry of Trade.

“I have several ideas to launch my own start-up and just want to figure out a gap in the market. I won’t give you too many details now but I have reached out to some Iraqi social media influencers for promotion and marketing,” he said.

Tue Jan 11 , 2022
Downtown Milwaukee, Wisconsin. REUTERS/Brian Snyder Register now for FREE unlimited access to Reuters.com Register Dykema added a seven lawyer capital markets team from Husch Blackwell to launch a Milwaukee office One of them was fired last year after being placed on leave amid tax and other problems, Husch said The […] 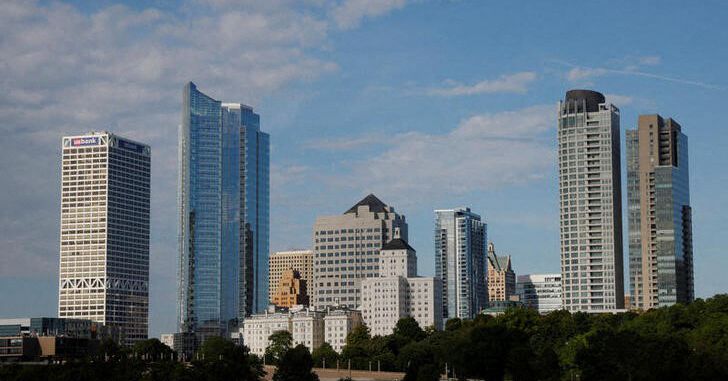