Mr. Smith, a Fort Worth lawyer and Democrat, worried that Mr. O’Rourke’s approach was too confrontational in that moment, a day after an 18-year-old gunman stormed into Robb Elementary School. But in the days that followed, as details emerged that the police waited in a school hallway for more than an hour as children called 911 for help and Mr. Abbott acknowledged being “misled” about the response to the massacre, Mr. Smith changed his mind.

Mr. O’Rourke, 49, clearly took a political gamble when he disrupted the governor in an emotional outburst that Republicans and some Democrats believed crossed a line in the aftermath of a mass shooting that left 19 students and two teachers dead. He was speaking not only as an outraged parent and Texan, but also as Mr. Abbott’s Democratic opponent in the race for governor.

But interviews with Democratic lawmakers, strategists and voters in recent days showed that his return to speaking out about gun control and gun violence has helped him make a powerful connection with many over the tragedy in Uvalde, bringing a new energy to his long-shot campaign to unseat Mr. Abbott and a new urgency to efforts to overhaul the state’s lax gun laws.

The very issue that had haunted his campaign for governor for months — his remarks during his 2020 presidential campaign calling for more aggressive gun restrictions — has suddenly helped revive it. Those past comments — “Hell yes, we’re going to take your AR-15, your AK-47,” he said on a debate stage in 2019 — had seemed politically foolish as he campaigned in gun-friendly Texas, and he had sought to moderate them. Now, to many Texans saddened and angered by a deadly attack on schoolchildren by a gunman with an AR-15-style rifle, Mr. O’Rourke’s stance on guns has taken on a fresh resonance.

“They say that cost him the election,” said Mary Taylor, 66, a retired human resources manager and former substitute teacher who attended a town hall event on guns that Mr. O’Rourke held in Dallas on Wednesday. “But he had the right idea last time, and now he has more people that are getting on the bandwagon.”

In an address at the White House on Thursday, President Biden called on Congress to pass gun control measures. Many were similar to the ones Mr. O’Rourke has been pressing for in Texas — including stronger background checks, a ban on assault weapons and laws to require gun owners to keep their firearms safely stored and allow authorities to take guns away from people who may hurt themselves or others.

For some Democratic state leaders, the massacre and Mr. Abbott’s response compounded their frustration with the governor after his hard-right push on abortion and his rhetoric against immigrants, as well as his handling of the state’s troubled electric grid. Mr. O’Rourke has embodied that breaking point.

“He is frustrated just like me, just like everyone else,” said State Senator Roland Gutierrez, a Democrat who represents Uvalde and who made his own interruption at another Abbott news conference, urging the governor to call for a special session of the Texas Legislature to pass gun-control legislation.

Mr. O’Rourke’s campaign for governor is an uphill battle that some say remains all but impossible in Texas, where Republicans have a solid grip on state power.

No Democrat has won a statewide race in Texas since November 1994 and no Democrat has occupied the governor’s mansion since January 1995, the last day of Gov. Ann W. Richards’s tenure. Despite years of Democratic promises of a blue wave, Texas keeps passing and enforcing some of the most conservative policies in the country. Democratic organizers continue to grapple with low voter turnout as Republicans have made gains in South Texas border cities. And in the governor’s race, Mr. Abbott has a significant financial advantage — he had nearly $50 million in cash on hand compared to Mr. O’Rourke’s roughly $6.8 million as of Feb. 19, according to the latest Texas Ethics Commission filings.

“Their prospects are bleak,” said Cal Jillson, a political analyst and professor at Southern Methodist University in Dallas. “In a good year, they can win some down-ballot offices and even some Texas state legislative seats, but they have not been able to break through statewide, and 2022 is not shaping up to be a good year.”

For the longtime Democratic strategists and activists who have been working to turn the state blue, recent electoral contests have left them at once optimistic and worried. Mr. O’Rourke’s Senate bid in 2018 re-energized the party and helped sway down-ballot races in favor of Democrats as he came within three percentage points of unseating Senator Ted Cruz.

But Texas Republicans were aided by higher turnout in smaller counties in the 2020 election, and those largely rural areas have been shifting even more to the right. In a Republican primary runoff for attorney general two weeks ago, Ken Paxton, the Trump-backed incumbent, trounced George P. Bush, the state’s land commissioner and the last member of the Bush family still in public office.

Mr. O’Rourke, the former El Paso congressman, has cast the race between himself and Mr. Abbott as a choice between old leadership beholden to the gun lobby and his vision for a state where “weapons of war” are removed from civilian life. At the Dallas forum on Wednesday, he said he had rushed the stage to confront the governor in Uvalde because he wished someone had done the same after a mass shooting at a Walmart in his hometown of El Paso in 2019.

“I am more worried that one of those AR-15s is going to be used against my kid or your kid,” he told reporters after the Dallas forum. “The problem we have is that people are more worried about the politics or polling than doing the right thing.”

But Luke Macias, a Republican political consultant who has worked with some of the state’s most conservative lawmakers, said Mr. O’Rourke seems to be returning to the stances that he took as a presidential candidate, ones that damaged his credibility with independent Texas voters.

“Once you lose their trust, it is hard to gain them back,” Mr. Macias said.

Still, Democrats and some independents said they hoped this was the moment that would transcend politics. For many, the emotions from the attack are still raw as funerals have begun in Uvalde, and the trauma has made it difficult for many to even discuss its political ramifications. In conversations, the voices of Democratic leaders and voters often cracked with emotion, and some of them shed tears.

Mr. Smith, the Fort Worth lawyer, spoke as he picked up his 12-year-old twins and 8-year-old son on the last day of school. His children had not been able to bring their backpacks on the last day before the summer break because officials had been concerned someone would bring a gun.

“I think people are really heartbroken about what has happened,” Mr. Smith said. “I don’t think this is just another news story. Parents are scared.”

Since 2017 alone, Texas has been the site of five mass shootings that have taken the lives of 87 victims, including attacks at the First Baptist Church in Sutherland Springs in 2017 and Santa Fe High School southeast of Houston in 2018. Yet even as the governor has held town halls and at times has expressed an openness to tightening gun laws, Texas continues to have some of the least restrictive rules in the country. In 2021, Mr. Abbott signed a law allowing anyone over 21 to carry a handgun without a permit or training.

After the killings in Uvalde, he and other Republican leaders in Texas have focused on the need to increase school security and access to mental health care, though the Uvalde gunman had no known history of mental issues. On Wednesday, Mr. Abbott tweeted a letter to state leaders calling for a special committee to address mass violence in schools. Among the list of topics was “firearm safety.”

Mark Miner, a spokesman for Mr. Abbott’s campaign, said the governor was focused on the response to the tragedy and was declining to speak on political issues at this time.

At Mr. O’Rourke’s town hall in Dallas, where supporters welcomed him with cheers and a standing ovation, he held firm on his support for stronger gun control measures yet also pledged to work with Republicans. He challenged his supporters to knock on doors and have uncomfortable conversations with voters on gun measures in the hopes of finding common ground.

Mr. O’Rourke described how he had promised the mother of Alithia Ramirez, a 10-year-old girl who was killed at Robb Elementary, that he would work to prevent another mother from going through the same trauma. Yet even in Alithia’s own home, the divide was evident: One of her relatives told Mr. O’Rourke that he did not want to give up his AR-15 because he hoped to serve in the military.

“If you are going to trust me to give my life for this country, you should trust me to own an AR-15,” Mr. O’Rourke said the young man told him. But, Mr. O’Rourke added, “there was more that we agreed upon than we disagreed on.”

What Are The Best Business Schools In Florida?

Fri Jun 10 , 2022
For anyone with an interest in entrepreneurship, you should look no further than Florida. The state has one of the highest startup formation rates in the US, making it a great place to learn insider tips to launching an exciting venture. Plus, if you decide to study your business degree […] 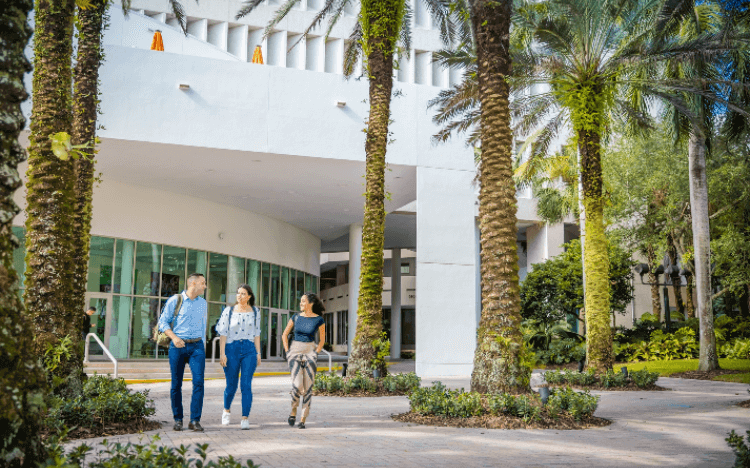