Scott, the chair of the National Republican Senatorial Committee, unveiled his conservative campaign blueprint in February. But the messaging document was quickly rejected even by Senate Minority Leader Mitch McConnell and fellow Republicans, who viewed it as detrimental to GOP candidates across the country.

Speaking at the White House, Biden described his personal economic philosophy as “in sharp contrast to what today’s Republican Party is offering — and if they hadn’t put this in print, you’d think I was making it up.”

Responding to Biden’s remarks, Scott told Fox News that “almost every sentence was a complete lie.” He went on to accuse the president of “passing the buck” on financing federal programs such as Medicare and Social Security.

Biden’s remarks underscore broader efforts by Democrats — who are facing significant political headwinds ahead of the midterm elections in November — to highlight Scott’s unpopular economic proposals and Republicans’ emphasis on divisive cultural politics.

“This is the MAGA party now. … These guys are a different breed of cat,” Biden said in Seattle earlier this month. “They’re not like what I served with for so many years. And the people who know better are afraid to act correctly, because they know they’ll be primaried.”

Meanwhile, Trump’s strength within the Republican Party has shown no sign of diminishing. His preferred candidate in Ohio’s open Senate race, J.D. Vance, won the contentious GOP primary on Tuesday in what was widely viewed as an early test of the former president’s political staying power.

On Wednesday, Biden also reiterated his concerns about the Supreme Court draft majority opinion — published by POLITICO on Monday — that would strike down Roe v. Wade. Such a ruling, he warned, would endanger other fundamental rights related to Americans’ privacy.

“What happens if you have states change the law saying that children who are LGBTQ can’t be in classrooms with other children?” Biden said. “Is that legit under the way the decision is written? What are the next things that are going to be attacked?”

Sun May 8 , 2022
Already under fire from the Digital Security Act, Bangladeshi journalists face even worse censorship if a new piece of legislation gets up. I was picked up, held, interrogated and eventually deported by intelligence services because of my reporting, Susannah Savage, a freelance journalist working for […] 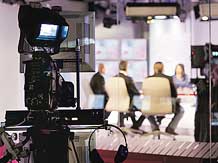