Markeishia Smith set herself a New Year’s resolution of disconnecting from media.

Smith, a Haines City lawyer, had stuck to that pledge all the way into late March. That’s when her husband, Vernel Smith Jr., suggested that she make an exception to watch the televised Senate confirmation hearings of Judge Ketanji Brown Jackson, then under consideration for a seat on the U.S. Supreme Court.

Smith, a Black woman, said she is grateful that she tuned in to the coverage. She was in an exultant mood Friday afternoon as she reflected on Jackson’s confirmation a day earlier as the first Black woman justice in the Supreme Court’s 232-year history.

“When I saw her at the hearings, in the process, my heart swelled,” Smith said. “That’s the best way I can describe it. I felt an immense amount of pride. I saw representation — and representation matters. It’s mattered in every area of my life. Seeing someone else that looks like me, at a point in their career where they’re being considered as a candidate for the highest court in the land — this is SCOTUS. It’s everybody’s dream at some point, even if you think, ‘I want to be a corporate lawyer,’ it crosses your mind at one point, ‘Could I be on the Supreme Court?’ Or, ‘Could I argue before the Supreme Court?’ Because those are the cases that shape the very foundation of our nation.”

Voice of the People:No Supreme Court justice has better credentials than Jackson

‘Not what I planned to do’:Stargel finishes influential career in Florida Legislature

Only 6% of lawyers in Florida are Black women

Smith joined other Black female lawyers and judges with ties to Polk County in celebrating Jackson’s confirmation. President Joe Biden nominated Jackson, who spent her youth in Miami, to succeed Justice Stephen Breyer, who will retire this summer.

Jackson will be the third Black justice, following Thurgood Marshall and Clarence Thomas, among the 115 who have served on the nation’s highest court. She is the sixth woman to join the bench.

Though most Republicans opposed Jackson’s confirmation, the Senate ratified her ascension to the Supreme Court with a 53-47 vote.

Smith, 40, grew up in Lake Wales and Lake Hamilton and graduated from Haines City High School. She became a teacher and then a principal with Polk County Public Schools before getting a law degree from Florida A&M University College of Law in Orlando.

She worked one year for a Winter Haven law firm before opening her own office in downtown Haines City. Her practice handles personal injury, real estate and probate cases.

In other news:US Supreme Court has consistently sided against banning books

Smith said previous generations of Black Americans witnessed historic changes in society, and she considers Jackson’s appointment to the Supreme Court to be another milestone.

She said that only 6% of lawyers in Florida are Black women.

“It makes me feel even more comfortable in this element where, let’s face it, the legal system is dominated by white males,” she said. “So, to see one of the 6% — because that’s what I always tell people, when I look at this dream of mine that I had, that I can’t believe that I am in the 6%, right? So one of the 6% beat all the odds, remained humble and is going to be sitting on SCOTUS. It is absolutely exhilarating.”

Only 3 out of 28 circuit judges in Florida’s 10th Judicial Circuit, based in Bartow, are Black women

Of the 28 circuit judges in Florida’s 10th Judicial Circuit, based in Bartow, three are Black women: Cassandra L. Denmark, Dana Y. Moore and Torea Spohr. There are no Black women among the circuit’s 12 county judges.

The Second District Court of Appeals, which is based in Lakeland but holds proceedings in Tampa, has no Black women among its 16 judges.

Denmark, a former director of legal affairs for the Polk County Sheriff’s Office, operated a law firm in Bartow from 2013 to 2020 before being elected as a judge. She is assigned to juvenile court.

Moore started her career as a lawyer in 2003 and won election to the 10th Judicial Circuit in 2018. She handles civil cases. Spohr, who previously operated a criminal defense practice in Lakeland, gained election in 2020. She is assigned to family court.

In response to an inquiry from The Ledger, Denmark and Moore emailed a joint statement.

“When witnessing Ketanji Brown Jackson’s historic confirmation to the United States Supreme Court, as Black female jurists we cannot help but feel a sense of pride and joy,” the judges wrote. “Justice Jackson’s ascension to the nation’s highest court as the sixth woman and the first Black female to serve will inspire generations to come.”

Did you know:Polk County Commission approves cameras for conference room

‘Representation is so important, especially in the Black community’

“Representation is so important, especially in the Black community,” Constant said by email. “I’ve always wanted to see a day like this, and that day has finally come. It’s so exciting and such a powerful moment in history! I’m so moved by this moment and overwhelmed with joy for Justice Ketanji Brown Jackson. She’s such an inspiration and I am so proud.”

Florida Rep. Fentrice Driskell, D-Tampa, is a Winter Haven native and an alumna of Lake Gibson High School in Lakeland. She graduated with honors from Harvard University and earned a law degree from Georgetown.

Driskell clerked for Judge Anne Conway of the U.S. District Court for the Middle District of Florida and is now a lawyer with the Tampa firm Carlton Fields.

“Judge Ketanji Brown Jackson is eminently qualified and an excellent jurist whose presence will only enrich our esteemed United States Supreme Court,” Driskell said in an emailed statement. “Her confirmation represents the fulfillment of a dream that for too long had been deferred for Black women lawyers like me. It took 177 years since our federal judiciary was established for America to appoint its first Black female federal judge, the late Hon. Constance Baker Motley, in 1966.”

She added: “It has taken over 55 years since then for our country to nominate a Black woman to our highest court. While we clearly still have a long way to go before nominations like Judge Brown Jackson’s are the rule and not the exception, all Americans should celebrate this quantum leap forward in our history. I commend President Joe Biden for honoring his campaign promise and for bringing this historically momentous occasion to fruition.”

‘Black girls, white girls, Latino girls and all girls of color can see that, ‘I can do it; she did it”

One of Driskell’s mentors, former state Sen. Arthenia Joyner, was born in Lakeland and in 1970 became the first Black woman lawyer in the city. Joyner is still practicing in Tampa at age 79.

“As a Black woman who was the fifth Black woman lawyer in the state of Florida back in 1969, when I passed the Bar, this is a colossal, exciting, exhilarating day for me,” Joyner said Thursday by phone. “Fifty-three years ago, I was just looking forward to having the first Black woman judge in Hillsborough County, let alone sitting at the highest court in this nation.”

Joyner said Jackson deserves to be on the Supreme Court, and not merely as a representative of Black women.

“She’s eminently qualified,” Joyner said. “And she showed the nation that she has the greatest temperament ever seen to have endured all those hours of that intense scrutiny and questioning and interruptions by some by Republican senators. … That woman truly personifies grace under fire. She was outstanding — phenomenal, really, is what she was — through that process. And I’m so proud and happy today.”

Both Joyner and Smith said that Jackson’s appointment to the Supreme Court offers a signal of encouragement and hope to Black girls who might consider legal careers.

“The effect is going to be a complete sea change and a rippling effect across the nation, where Black girls, white girls, Latino girls and all girls of color can see that, ‘I can do it; she did it,’” Joyner said. “She was able to overcome all of the stereotypes, obstacles, all of the incessant questioning by those senators, but she came out exemplifying the best that there can be. … All of the Black girls and Latino girls and the white girls, everybody, that is going to inspire them to follow their dreams, to know that everything is possible.”

Smith, a mother of three boys, made a similar point. She said it was particularly inspiring to see Jackson willing to appear during the Senate confirmation hearings with natural hair and ignore the pressure to assimilate in her appearance.

Smith said she expects Jackson’s presence on the Supreme Court to boost the representation of Black women among lawyers in her home state.

“I believe it’s going to completely change the scope of how our Black girls view themselves in the legal field,” Smith said. “They’re going to know that they can go to the highest point. That’s what I feel. I think it’s going to directly impact and affect that number and cause that number to rise. The longer she stays there, the more influence that she has. And the greater her power grows — I believe that it’s going to spread like wildfire. They’ll be reading about her in school. They’ll be doing book reports on her.”

What are the interview-free government jobs in Telangana?

Wed Apr 13 , 2022
Published: Updated On – 07:32 PM, Mon – 11 April 22 By Ajay Jayavarapu The government jobs in Telangana 2022 have been announced, and there is a wide variety of job positions. Most of the job positions are to be filled by graduates with a minimum qualification of a bachelor’s. […] 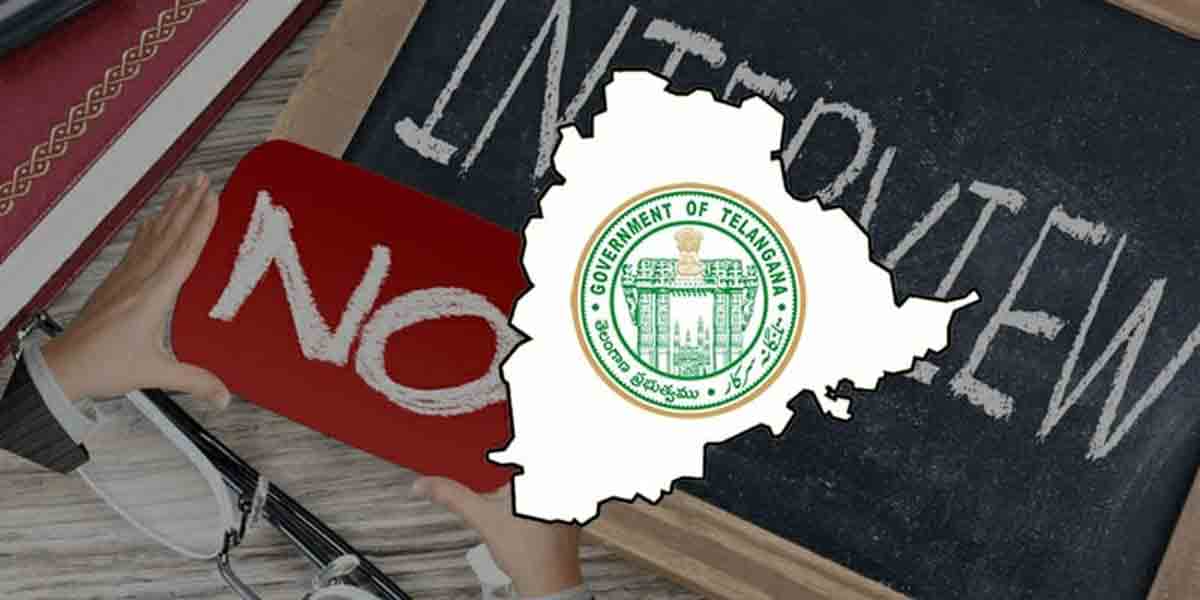