Donald Trump has furiously accused Hillary Clinton’s election campaign of treason after a special counsel said her team had tried to spy on his White House servers in a bid to find ties to Russia to smear him with.

The former president unleashed a furious broadside on Saturday, claiming that Team Clinton’s behavior would once have merited execution, after Special Counsel John Durham made a court filing explaining the alleged hack. The story was first reported on Fox News earlier in the day.

Trump said: ‘The latest pleading from Special Counsel (John) Durham proves indisputable evidence that my campaign and presidency were spied on by operatives paid by the Hillary Clinton campaign in an effort to develop a completely fabricated connection to Russia.

‘This is a scandal far greater in scope and magnitude than Watergate and those who were involved in and knew about this spying operation should be subject to criminal prosecution.’

Trump continued: ‘In a stronger period of time in our country, this crime would have been punishable by death. In addition, reparations should be paid to those in our country who have been damaged by this.’ The behavior described in the filings is akin to what Democrats have repeatedly accused Team Trump of doing since 2016, without providing any evidence in support of their claims.

Donald Trump Jr echoed his father’s words on Twitter, writing: ‘BREAKING: Donald Trump and the RNC funded SIGINT collection AGAINST the Executive Office of the President of the United States, just like the Russians do. This is TREASON! 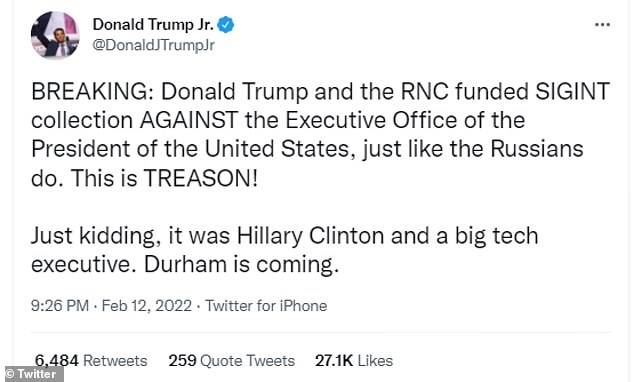 Donald Trump Jr. also lashed out at Clinton after the news, warning her: ‘Durham is coming’

‘Just kidding, it was Hillary Clinton and a big tech executive. Durham is coming.’

They spoke after Durham’s filings revealed how Hillary Clinton’s election campaign paid money to a tech firm to ‘infiltrate’ servers that were at Trump Tower, and later the White House.

According to a filing from Special Counsel John Durham, the aim was to try and smear Trump by linking him to Russia, which had been accused of meddling in the 2016 U.S. Presidential Election.

Durham was appointed by then-Attorney General William Barr to serve as the Special Counsel for the United States Department of Justice in October 2020, while Trump was president. He continues to investigate a case that is sure to anger supporters of the 45th president.

Durham’s motion that was filed on Friday looked a potential conflicts of interest with regards to former Clinton campaign lawyer Michael Sussman, who has been charged with making a false statement to a federal agent. Sussman has pleaded not guilty to the charge.

‘Per Durham, this arrangement was put in motion in July of 2016, meaning the Hillary Clinton campaign and her lawyers masterminded the most intricate and coordinated conspiracy against Trump when he was both a candidate and later President of the United States while simultaneously perpetuating the bogus Steele Dossier hoax,’ Patel told Fox. 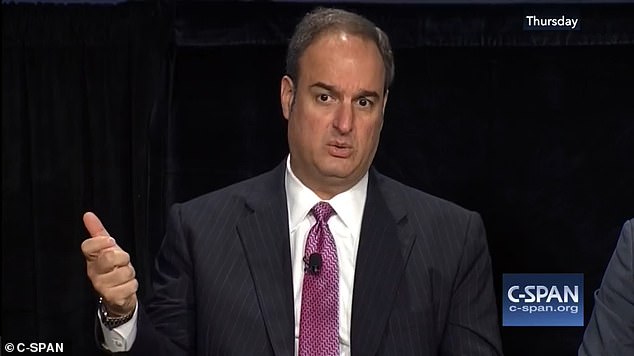 Clinton campaign lawyer Michael Sussman, pictured, has been charged with making a false statement to a federal agent. Sussman has pleaded not guilty to the charge 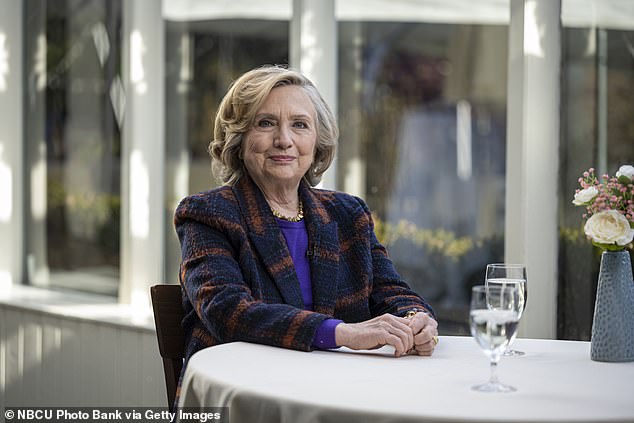 Hillary Clinton’s election campaign paid money to a tech firm to ‘infiltrate’ servers that were at Trump Tower, and later the White House, according to a filing from Special Counsel John Durham 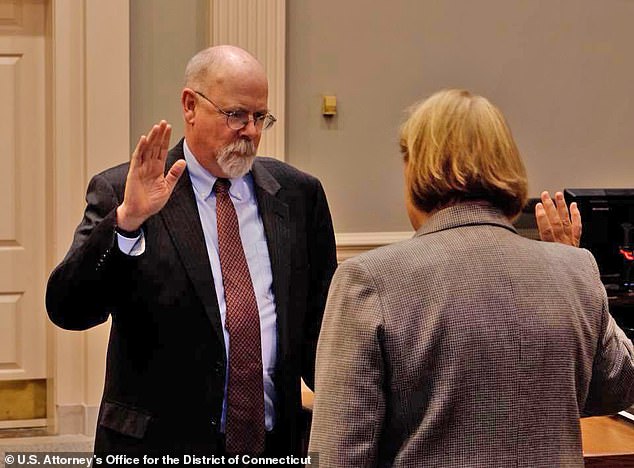 Sussman’s indictment is part of Special Counsel John Durham’s probe of the FBI investigation into claims that Trump’s campaign colluded with Russian officials.

The indictment against Sussman details how two months prior to the presidential election, in September 2016, he explained to FBI General Counsel James Baker he was not working ‘for any client’ when presented papers allegedly outlining a ‘covert communications channel’ between Trump’s Organization and Alfa Bank, the largest of the private banks in Russia which has ties to the Kremlin. 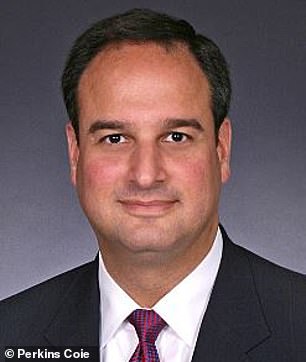 Democratic lawyer Michael Sussman was indicted for allegedly lying to FBI general counsel James Baker over whether he was advising Hillary Clinton.

In Durham’s filing on Friday, he revealed how Sussman ‘had assembled and conveyed the allegations to the FBI on behalf of at least two specific clients, including a technology executive (Tech Executive 1), named as Rodney Joffe, at a U.S.-based internet company (Internet Company 1) and the Clinton campaign.’

The name of the internet firm has not been disclosed in any reports or court documents so far.

But Joffe is the founder of UltraDNS, the first cloud-based company to market ‘domain name services,’ which connects a website’s numerical address to a more user-friendly letter-based domain name.

DNS has been referred to as the ‘phone book of the internet,’ and DNS servers such as Joffe’s UltraDNS and the more modern Cloudflare are generally able to access and view their millions of users’ internet histories.

UltraDNS was bought by tech company Neustar for nearly $62 million in 2006. Joffe’s LinkedIn shows he served as an executive at Neustar from then until retiring in September 2021.

Neustar is a Virginia-based internet analytics and data firm that recently aided an unnamed U.S. state in its COVID-19 contact tracing program, according to the tech firm’s website.

It also aided Scandinavian airline SAS in cutting down its marketing costs by analyzing the most targeted and effective approaches to reach customers, reflecting the company’s massive data mining abilities.

Sussman’s own ‘billing records’ show he ‘repeatedly billed the Clinton Campaign for his work on the Russian Bank-1 allegations.’

It also states how Sussman and the Tech Executive (Joffe) met to speak with another lawyer working as General Counsel to the Clinton campaign, who Fox identify as Marc Elias from Perkins Coie law firm.

The filing also reveals how Josse worked with Sussman at the instruction of the Clinton campaign to ‘assemble the purported data and white papers’ – essentially to gather information that would tie Trump to Russia.

Durham tells how Tech Executive-1 said he was trying to please certain ‘VIPs,’ which is said to have been a reference to the Clinton campaign. 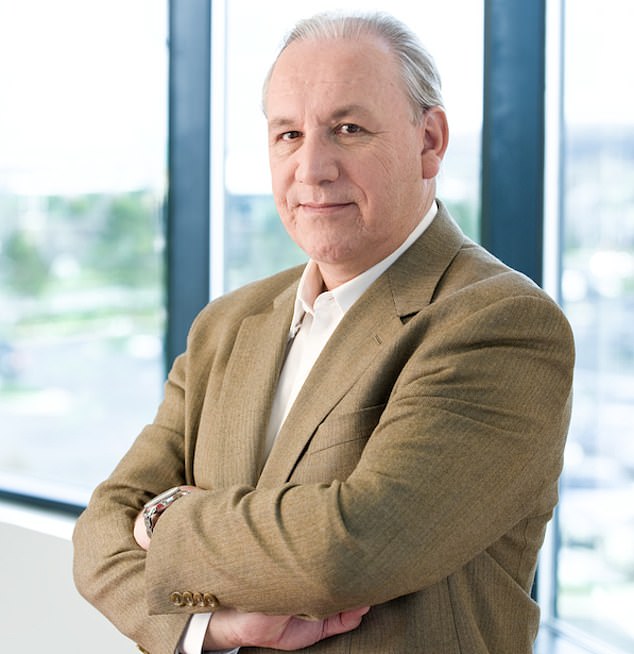 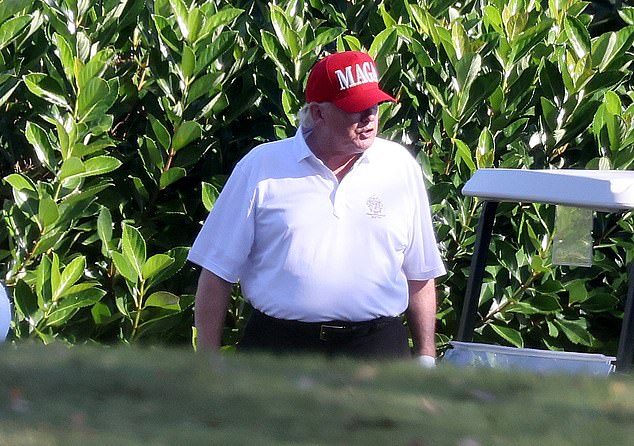 Durham explains that at Sussman’s trial, the government will prove how Joffe was able to able to see what websites were being viewed on computers at Trump Tower, Trump’s Central Park West apartment and at the White House.

Durham notes that Joffe’s position as a ‘Tech Executive’ saw him entrusted to maintain dedicated servers for the White House and president’s office.

‘Tech Executive-1 and his associates exploited this arrangement by mining the Executive Office of the President’s DNS traffic and other data for the purpose of gathering derogatory information about Donald Trump,’ Durham states.

Joffe is not accused of any wrongdoing and had simply ‘retained Sussman as his lawyer’.

Neither Neustar nor UltraDNS are named in the filings or explicitly linked to ‘Internet-company-1.’

Sussman’s compiled ‘suspicious data’ which included all manner of websites including those of a Russian mobile phone company before going on to claim that Trump and those around him were ‘using rare, Russian-made wireless phones in the vicinity of the White House and other locations.’

But Durham’s report essentially pours cold water over such suggestions, or that there was anything unusual with the looking-up of a Russian cellphone company.

‘The Special Counsel’s Office has identified no support for these allegations,’ Durham wrote noting the ‘lookups were far from rare in the United States.’

‘For example, the more complete data that Tech Executive-1 and his associates gathered–but did not provide to Agency 2–reflected that between approximately 2014 and 2017, there were a total of more than 3 million lookups of Russian Phone-Prover 1 IP addresses that originated with U.S.-based IP addresses,’ Durham stated.

‘Fewer than 1,000 of these lookups originated with IP addresses affiliated with Trump Tower.

Some of the lookups occurred as early as 2014 when the Obama administration was still at the White House.

claims of legal confusion over AZ abortion laws are unfounded