How do you replace a man who once willingly put his hand in a steel trap during a congressional hearing until it turned blue? Who waggled an 18-inch walrus penis bone at a top administration official? Who held a knife to the throat of a fellow lawmaker?

How, in sum, do you replace Don Young?

The death of Representative Young at age 88 last week leaves a void that won’t easily be filled, Alaskan political insiders tell us. Young was the longest-serving Republican in the history of Congress, a living relic who decorated his House office with stuffed animal trophies and larded his speech with profanity. He cultivated the image of a crude frontiersman in Washington while protecting Alaska’s extractive industries and, as our colleague Emily Cochrane writes today, steering billions of federal dollars to pet projects back home.

In a replacement, Alaskans are looking for “someone who will go to Washington, give the bureaucrats hell and bring home the pork,” said Michael Carey, a columnist for The Anchorage Daily News and a longtime Young observer. “But I don’t think anybody can wrap themselves in his mythos.”

Just days after Young’s death, the race to succeed him is well underway. Friday is the deadline to file official paperwork, and potential candidates are already lining up.

Al Gross, a former orthopedic surgeon who ran unsuccessfully for Senate in 2020, is running as a “nonpartisan.” He is perhaps best known for a goofy music video promoting his candidacy that includes the line, “He’s killed a bear, caught lots of fish, not swayed by party politics” and ends by describing him as “Alaska’s own bear doctor.”

John Coghill, a former state senator with ties to the evangelical community, is running as a Republican. Nick Begich III, the Republican scion of Alaskan political royalty, has also indicated that he will enter the race, as has Christopher Constant, an openly gay Democrat who is a member of the Anchorage Assembly.

Few expect Sarah Palin, a former Alaska governor and the Republican nominee for vice president in 2008, to run. She told Sean Hannity, the Fox News host, last week that she was weighing whether to “throw my hat in the ring,” but made no commitment.

Some in the Republican establishment favor Joshua Revak, an Iraq war veteran who previously worked for Young and is now a state senator. There’s also Tara Sweeney, an Alaska Native whose husband, Kevin Sweeney, is a consultant for Senator Lisa Murkowski’s re-election campaign. Tara Sweeney served in the Trump administration as assistant secretary of the interior for Indian affairs.

Young’s death came as he faced growing doubts about his political longevity, with the prospect of being squeezed from left and right for the first time.

“For years, Don was this untouchable Alaskan institution,” said John-Henry Heckendorn, a political consultant in Anchorage. “He had always been able to turn his fire and intensity on one enemy. But he had never really had to fight a war on two fronts.”

Whoever ultimately decides to run, the House special election to replace Young will be watched closely. For the first time, the state will be using its unique “top four” primary system — and Alaskans aren’t sure what to expect.

In the first round of the special election, to be held on June 11, every candidate appears on the same ballot. Voters each pick one candidate, and the four top vote-getters move ahead to the special general election, scheduled for Aug. 16. Voters then rank up to four favorites, including a write-in option. If no one earns an outright majority, election officials eliminate the lowest-ranking candidate, repeating the process up to three times until there is a winner.

Supporters of the system say it will break the stranglehold political parties have over primary elections, give voters more choices and create incentives for bipartisan cooperation.

“We’re already seeing more and different kinds of names, which is great for voters,” said Jason Grenn, the executive director of Alaskans for Better Elections, a nonprofit group that promotes the top-four system.

Some confusion might be inevitable. In a quirk of scheduling prompted by Young’s death, the regular open primary for his seat will be held the same day as the special general election for his seat. That means Alaskans will be choosing someone to represent them in Washington for the next two years even as they also choose someone to represent them for the remainder of 2022. It could be the same person — or someone completely different.

The top-four system will also be used in Alaska’s Senate election, a fact that has spawned accusations of political intrigue.

Former President Donald Trump has made it his mission to oust Murkowski, who is defending her seat against Kelly Tshibaka, a Republican challenger. Murkowski was one of only seven Republican senators who voted to convict Trump during the impeachment trial last year, earning her a rebuke from the state’s Republican Party. As an incumbent, she has the backing of Senator Mitch McConnell, the minority leader, pitting the party’s establishment against its Trump wing.

Tshibaka’s campaign team claims that the top-four system, which was adopted by ballot initiative in 2020, was devised to aid Murkowski’s re-election.

There’s little evidence of that, though Kathryn Murdoch, an independent donor who helped fund the ballot initiative, said in an interview this month that the top-four system “allows Lisa Murkowski to be herself instead of worrying about her extreme right flank.”

The claim prompts a chuckle from supporters of the system, who say that it is meant to alleviate the gridlock that often paralyzes Alaskan politics, and that it is not a product of Washington power games.

“I haven’t talked to Lisa Murkowski in three or four years,” said Grenn, who is also a former state legislator. “There are no dark shadows behind the scenes.”

The ballad of Clarence and Ginni

Congressional investigators want to know why Virginia Thomas, the wife of Justice Clarence Thomas, exchanged conspiracy-theory-tinged texts with Trump administration officials about overturning the 2020 election in the weeks leading up to the Capitol riot. Democrats are calling for Justice Thomas to recuse himself from any Supreme Court cases about the events of Jan. 6, while they press for more details about her involvement in that day’s drama.

To better understand this unorthodox Washington pair, we chatted with Danny Hakim, an investigative reporter for The New York Times who recently wrote, with Jo Becker, a deeply reported Times Magazine article on the Thomases. Here’s our conversation:

What first sparked your interest in them as a couple?

The court has really moved toward Justice Thomas in the post-Trump era, since the pick of Amy Coney Barrett took place in the waning days of the Trump administration. For years, Justice Thomas was known for solo dissents or sharply written dissenting opinions, but now some of those might become majority opinions as the court’s dynamics have tilted.

At the same time, his wife was a hard-line activist on the fringes of the party before she flourished in the Trump era, to the point she had direct access to the president. She has remained an important figure in the Trump wing of the party.

There’s a line in your article that mentions that Ginni Thomas was in a group she later denounced as a “cult.” Were you able to learn anything more about her time there?

The group was called Lifespring, and it was popular for a while. The best story I read about it was a 1987 piece in The Washington Post by Marc Fisher, who went to some meetings. The group would sort of break you down and get you crying and then try to build you back up, but it was quite controversial. One trainee told Fisher it was “like an enema of your emotions.”

Ms. Thomas took part in the group in the early 1980s and then rejected it. And she took Clarence Thomas with her to at least one meeting of an anti-cult group that she attended in the wake of her departure from Lifespring.

Ginni Thomas refers to her “best friend” in one of the texts that has emerged. Is it a leap to assume that’s a reference to her husband?

We can’t say for sure, but they have used that kind of language when they describe each other. In his memoir, Justice Thomas refers to his wife as his “best friend.” She has called him “the best man walking the face of the Earth,” and friends of theirs whom we talked with told us they referred to each other that way. Justice Thomas has gone even further and called the two of them “one being — an amalgam.”

Is your sense that Ginni Thomas is someone whose advice carries weight in the Republican Party, or is she someone who is humored because of her political connections and because of who her husband happens to be?

It’s a good question. I think both. Her proximity to Justice Thomas is central to her influence, and it’s the reason she got the access she did to the Trump White House. She does not hesitate to invoke her husband’s name in her interactions with party officials and activists.

At the same time, while establishment Republicans are often exasperated by her and see some of her views as outlandish, she does have a following among the hard-line wing of the party that is so prominent now, and she has spent years working in Washington alongside people like Steve Bannon to move the party to the right.

Thanks for reading. We’ll see you tomorrow.

Is there anything you think we’re missing? Anything you want to see more of? We’d love to hear from you. Email us at [email protected].

Perks Of A Government Job Over Private Sector Jobs

Sat Apr 9 , 2022
These days, many people are choosing government jobs over private-sector jobs. The number of government job aspirants in India is increasing day by day. There are many reasons for this trend. Many state governments also opened opportunities for talented youth. Recently, Punjab Government announced 25,000 government jobs in the current financial […] 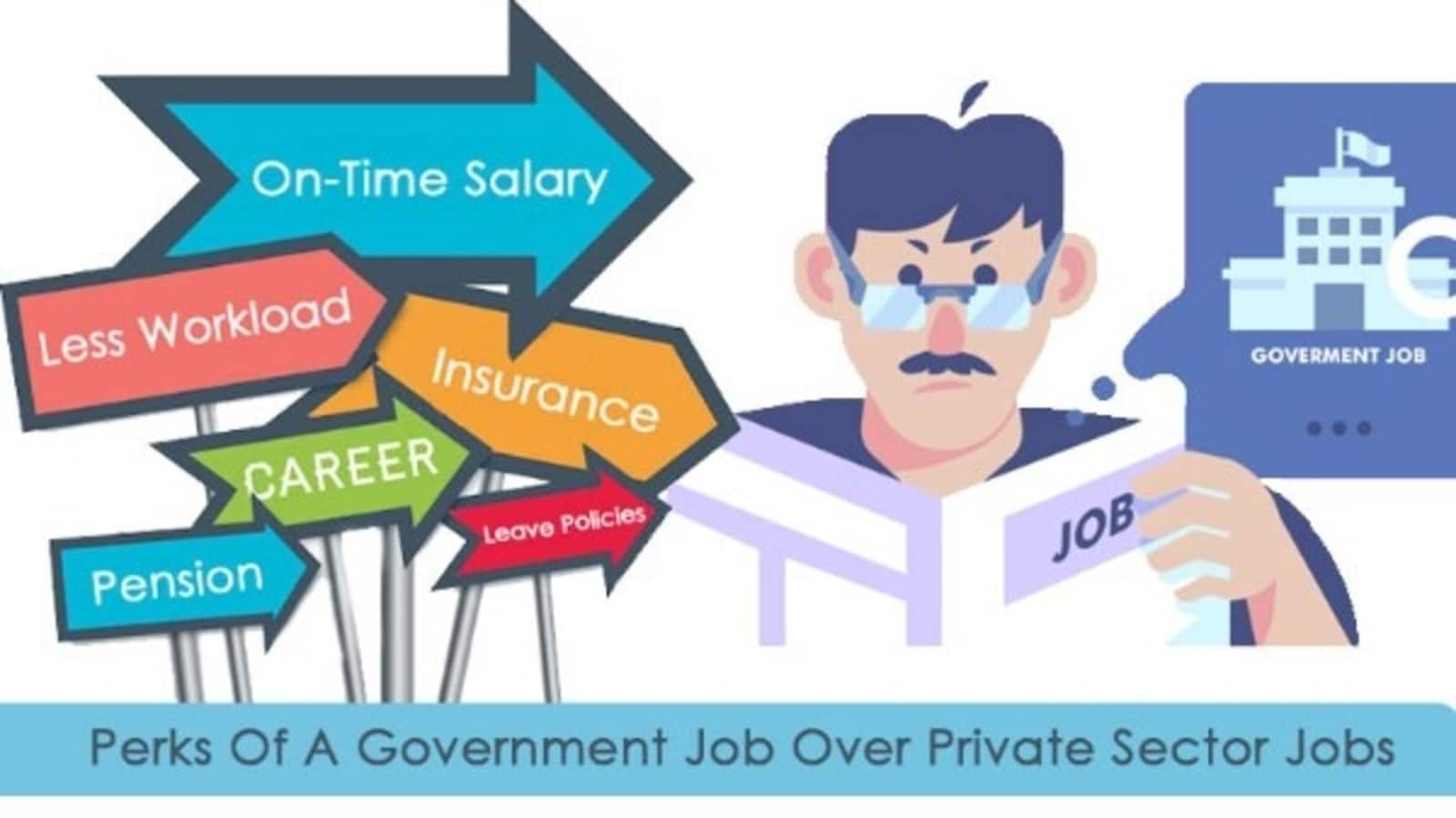