Judge Ketanji Brown Jackson could make history as the first Black female Supreme Court justice but some Senate Republicans with their eyes on higher political office are making her confirmation hearing all about them.

“Do you agree … that babies are racist?” Sen. Ted Cruz of Texas asked Jackson at one point on Tuesday, as he mined books in the curriculum of her children’s school in a made-for-conservative-TV grilling on cultural war issues that power Republican politics.

Nothing in Jackson’s second day before the Senate Judiciary Committee suggested her nomination is in difficulty, given the narrow Democratic majority in the full chamber. But while they probably can’t stop her taking a seat on the high court, some Republicans tried to turn her into a caricature of President Joe Biden’s policies ahead of midterm elections in November and their own possible future White House bids.

Wary of being seen as bullying the historic nominee, Republican senators praised Jackson’s credentials, character and intellect. But that didn’t stop some of them from portraying her as an advocate for child predators, a friend of terrorists, associated with Marxist anti-White doctrine and also soft on crime. The latter charge – that Democrats are against police and weak on crime – is a centerpiece of the Republican midterm campaign message.

Given the intense media focus on the war in Ukraine and the fact that the ideological makeup of the court is not at stake, it is not yet clear whether this hearing will have the vote-moving potential of previous such sagas, especially more than seven months before the November elections. And even thunder clap moments in confirmation hearings hardly guarantee campaign trail success, as then-senator and now-Vice President Kamala Harris found out after skewering now-Justice Brett Kavanaugh, to the delight of liberals in 2018, ahead of her bid for the Democratic presidential nomination.

But yet another hyper-partisan Judiciary Committee circus over a potential Supreme Court justice is sure to further tarnish the reputation of a critical branch of government at an already fraught political moment.

Nomination hearings should include a vigorous examination of a candidate’s record. But many of Tuesday’s questions – especially from Republican senators like Missouri’s Josh Hawley and Cruz, who may have presidential aspirations – had little to do with the duties of a potential Supreme Court associate justice. The questions often selectively cited various trials over which she presided.

There was also a palpable racial undertone to some of the questions. Cruz, for example, called on Jackson to answer for critical race theory – a concept that seeks to understand and address inequality and racism in the US. The term has been politicized by some conservatives into claims liberals are waging a battle against White America, and Republicans seem to believe it’s become a potent motivating factor for their base.

But insinuations that Jackson is a cypher of a racist movement are ironic since her nomination actually highlights more than 200 years and counting of White male justices dominating a high court that has never had a Black woman.

Jackson’s hearings are not taking place in a vacuum. The idea that the Supreme Court is an apolitical branch of government above the grubbiness of politics has always been quaint. But since 2000, when it decided a disputed presidential election, and after a conservative majority was built on hardball tactics by Senate Republicans, it’s become ever more politicized. The antics of some GOP senators took the process even further on Tuesday.

Some implicitly justified their treatment of Jackson by referring to contentious 2018 hearings in which Democrats raised historic sexual misconduct allegations against Kavanaugh, which he denied and that the then-Republican Senate majority never fully investigated. Their attitude underscored how every Supreme Court nomination hearing is now a forum for Republicans and Democrats to grind their axes over long-simmering grievances about previous nominations – dating back to Biden’s treatment of President Ronald Reagan’s conservative nominee, Robert Bork, in 1987.

Such hearings also drip with hypocrisy. One top Republican on the panel, Sen. Lindsey Graham of South Carolina, implied Jackson was a radical since her nomination was hailed by liberal outside groups. He ignored how the current 6-3 conservative majority on the court was built on the efforts of right-wing groups advocating for justices that share their political views.

The Supreme Court finds itself at a particular political crossroads, with a deeply conservative majority delivering rulings that will shape a sharply divided country for decades, on issues like abortion and gun control, which may often conflict with majority opinion in the United States. It can hardly afford spectacles that further taint its legitimacy in the eyes of many Americans. Yet that is what it got in Tuesday’s hearing.

In one of the most obviously politicized moments, Cruz brought up books he said were taught at a private school Jackson’s children attended and where she serves on the board of trustees. He showed a blown-up picture of a page in one book, “Antiracist Baby,” that he described as “stunning” and criticized the school’s curriculum as overflowing with critical race theory.

“Do you agree with this book that is being taught (to) kids that babies are racist?” Cruz asked. In response, Jackson sighed, in one of her few signs of impatience in a long day. She said she didn’t believe any child should be told they were racist. “I’ve never studied critical race theory and I’ve never used it. It doesn’t come up in the work that I do as a judge,” Jackson told Cruz. How a school curriculum over which Jackson has no control was relevant to her nomination was unclear. But Cruz had his political moment.

Not all Republican senators went for histrionics. Utah Sen. Mike Lee, who is deeply conservative, held a respectful discussion with Jackson on the Constitution. Nebraska Sen. Ben Sasse, who is highly unlikely to vote to confirm her, tried to tease out her views on the late Justice Antonin Scalia’s theory of originalism and on the more expansive theory of constitutional interpretation held by liberal justice Stephen Breyer, whom Jackson hopes to replace.

Prosecutors had sought 24 months, a recommendation far below the 97-121 month guidelines in the case. Hawley said he had a “hard time” getting his head around such an outcome. Jackson described the nuances of the case, which the Missouri Republican wasn’t keen to accept.

She told Hawley she spoke as a judge and a mom tasked with reviewing evidence. “It is heinous. It is egregious.”

Republican Sen. Marsha Blackburn of Tennessee closed the evening’s questioning by narrowing in on another issue being used by Republicans in some political messaging – transgender athletes. She asked Jackson to define “the word woman” and alluded to the success of University of Pennsylvania swimmer Lia Thomas, the first transgender athlete to win an NCAA Division I title. Jackson demurred on Blackburn’s question about what message Thomas’ victory sends, noting that related legal issues could come before the court.

Earlier, Jackson had rejected criticism of her time as a public defender for Guantanamo Bay detainees – a role that ensures that defendants, even those charged with the most savage crimes, get their constitutional right to a fair trial.

Sen. Tom Cotton, another Republican sometimes mentioned as a possible future presidential candidate, accused Jackson of twisting the law in another case because she was sympathetic to a drug kingpin. Jackson rejected the charge by the Arkansas senator, saying she was following guidelines laid down by Congress in sentencing. Blunt and somewhat condescending, Cotton posed a series of questions about whether police should arrest more criminals and whether sentences for those convicted should be longer.

Cotton, a graduate of Harvard Law School, would have been aware that many of these questions were policy orientated and beyond a judge’s purview. But he now has TV footage he can use in a political context to argue that Biden’s nominee for the Supreme Court couldn’t say whether murderers should stay longer in jail.

Wed Mar 23 , 2022
“I tell everyone, tip your housekeepers,” Gov. Steve Sisolak said Tuesday as he watched trainees at the Culinary Academy of Las Vegas practice the precise art of bed making.   Southern Nevada’s hotel housekeepers, overwhelmingly immigrants and women of color, can probably use the extra cash. The cost of a three-week […] 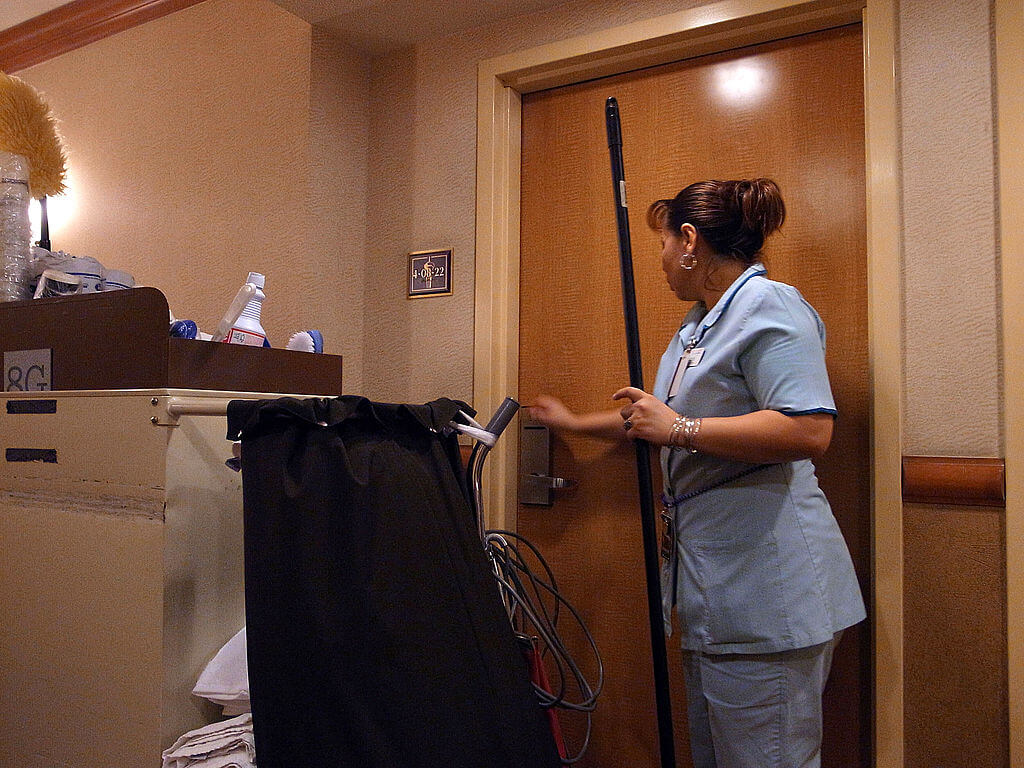