Most of the men and women offered the chance to serve on the high court react with humility and awe. Few pass up the opportunity, and fewer still turn it down twice. But few figures in the history of American politics compare to Conkling, the charismatic, vain and belligerent boss of the New York Republican Party during the 1870s.

Conkling preferred the rough-and-tumble of politics to the arid business of writing opinions, weighing precedents and listening to arguments instead of making them. “I could not take the place,” he once said of the Supreme Court, “for I would be forever gnawing at my chains.”

Trained as a lawyer, Conkling was elected to Congress as a Republican in 1858, quickly establishing himself as a steadfast partisan and opponent of enslavement. In 1859, Conkling, a six-foot-tall physical fitness buff who liked to box to stay in shape, stood between Republican Thaddeus Stevens of Pennsylvania and angry Democrats as debate over selection of a new House speaker threatened to turn violent. He denounced slavery as a “barbaric and detestable crime” in 1860. Defeated for reelection in 1862, Conkling returned to the House two years later.

Conkling’s tenure in the House was marked by a memorable skirmish with another up-and-coming Republican, James Gillespie Blaine, during which the normally affable Maine lawmaker savagely mocked Conkling for his “grandiloquent swell” and “majestic, super-eminent, overpowering turkey-gobbler strut.” The description stuck. Conkling never forgave Blaine and spent the better part of the next two decades battling his rival from Maine for supremacy in the Republican Party.

Conkling’s national profile grew after the New York legislature elected him to the Senate in 1867, where he allied with President Ulysses S. Grant and cut a distinctive figure among his fusty colleagues. While the fashion palette of the Senate ran the gamut from black to gray, Conkling favored colorful shirts and ties and light-colored slacks. A curl of blond hair fell across the top of his forehead.

“He is tall, well made, and has a florid complexion, with light sandy hair and beard,” a contemporary wrote. “In short, Mr. Conkling is a very good-looking man — a fact of which he is not at all ignorant.”

The Senate chamber typically echoed with lengthy speeches and pompous rhetoric, but Conkling addressed his colleagues in the manner of an aggressive prosecutor. “He is not satisfied with killing an antagonist’s argument,” Sara Jane Lippincott wrote in the New York Times, under the nom de plume Grace Greenwood. “If, after mashing the head of a fallacy, he passes triumphantly on, he is apt to go back, and pound at the innocuous reptile while there is a wriggle of life left in the tail.”

Conkling threatened to kill a newspaper editor who was planning to publish details of his extramarital dalliances, according to Blaine biographer Charles Russell. “Without malignity,” journalist George Alfred Townsend wrote, “Conkling is nothing.”

Grant admired the confrontational senator. When the Senate confirmed Grant’s nominee to run the Port of New York, its plentiful patronage jobs were put at Conkling’s disposal, effectively making him the head of the New York Republican Party. Conkling’s hold on the port strengthened when his ally Chester A. Arthur took it over in 1871. The following year, the Conkling machine helped Grant carry New York on the way to a landslide reelection victory and helped elect the Republican legislature that would send Conkling back to Washington for another six-year term.

Conkling, Frederick Douglass’s New National Era argued, “is entitled to the gratitude of the whole Republican Party” for his efforts during the campaign. Conkling apparently thought so too. “It is said that while before his ‘triumph’ in New York he would been satisfied with a seat on the Supreme Bench, he thinks now that the Presidency itself would not be too a good thing for him,” the Nation reported.

Grant bet he could make Conkling forget about the White House with an offer to succeed Chief Justice Salmon P. Chase, Abraham Lincoln’s former treasury secretary, who died in May 1873.

“When the chief justiceship became vacant I necessarily looked with anxiety to some one whose appointment would be recognized as entirely fitting and acceptable to the country at large,” Grant wrote to Conkling. “My own preference went to you at once.”

With an eye on the White House, and an awareness of his peculiar temperament, Conkling declined. “My transfer now from the Senate to the bench,” he wrote to the president, “involves considerations not only beyond my own interest and wishes but I think beyond those before you and after much thought I am convinced that in view of the whole case you would agree with me that another appointment should be made.”

During Grant’s second term, Conkling championed the administration’s controversial commitment to deflationary monetary policy and the interests of Southern Black Republicans. In 1875, he befriended newly elected Sen. Blanche Kelso Bruce of Mississippi, who had been born into slavery, on the Senate floor when Bruce arrived to present his credentials and his White colleagues ignored him. Bruce later told Conkling that “your warm words of welcome made me feel and know that in that august body I had a friend.” Bruce and his wife, Josephine, named their firstborn son after him.

Bruce’s admiration for the New York Republican boss was not widely shared. With a growing number of Republicans disillusioned with the Grant administration, Reconstruction and patronage politics, Conkling’s campaign for the Republican presidential nomination in 1876 failed to gain traction. At a critical moment during the Republican convention in Cincinnati, he agreed to throw the support of the New York delegation behind dark-horse candidate Rutherford B. Hayes, the governor of Ohio, who ended up getting the nomination. While the maneuver blocked his rival Blaine, Conkling “took his defeat much to heart,” New York Republican Thomas C. Platt later recalled.

More disappointment followed. During the campaign, Hayes endorsed civil service reform and vowed to put an end to patronage jobs in the federal government — aiming directly at the basis of Conkling’s political power. Conkling struck back hard. During a speech to the New York Republican convention in 1877, he denounced his foes as the “man-milliners, the dilettanti and carpet knights of politics” whose crusades reeked of hypocrisy. “Their real object is office and plunder,” Conkling told cheering convention delegates.

Undeterred by the fiery rhetoric, Hayes tried to pry control of the Port of New York from Conkling’s control. His nomination of New York blue blood Theodore Roosevelt Sr. to replace Arthur went down in defeat, but the president “refused to capitulate to Conkling,” Arthur biographer Scott S. Greenberger wrote, and Hayes eventually fired Arthur when Congress was out of town.

As Conkling’s grip on power weakened, he found himself at the center of another controversy. A long affair with Kate Chase Sprague — daughter of the late chief justice — burst into the headlines in 1879 after former senator William Sprague chased Conkling from his Rhode Island estate, where he discovered the senator visiting his wife. “Are you armed?” the enraged Sprague reportedly demanded of Conkling, who answered he was not. “Then I give you five minutes to get off these premises,” Sprague responded. “If you are not then away I will fire at you.”

Hayes delighted in the humiliation of his foe. “The Conkling scandal is the newspaper sensation of the time,” the president scribbled in his diary. “This exposure of C’s rottenness will do good in one direction. It will weaken his political power, which is bad and only bad.”

Whether it was because of the Sprague scandal or growing distaste for Conkling’s brand of politics, Hayes was right about one thing: Conkling’s political muscle was weakening. As the recognized leader of the Republican “Stalwart” faction, the New York boss put his organization behind Grant’s bid for a third term in the White House in 1880, but the nomination went instead to dark-horse James A. Garfield. Garfield offered the vice-presidential nomination to Arthur — and Conkling’s loyal subordinate accepted.

The downward spiral accelerated once Garfield assumed office. Another fight over control of the Port of New York ended with a Conkling rival nominated by Garfield assuming control of the facility. Conkling resigned from the Senate in protest, then changed his mind and campaigned in Albany to reclaim his seat. While he courted the state legislators who would fill the vacancy, a delusional gunman named Charles Guiteau shot Garfield at a Washington train station on July 2, 1881, and proclaimed “I am a Stalwart.” Garfield died on Sept. 19.

Guiteau was “totally unknown” to Conkling and obviously disturbed, Conkling biographer David Jordan wrote, “but all of these factors were resolutely ignored by the public in fixing blame for the attempt on Garfield’s life.” New York legislators, mortified by the attempted assassination and fed up with Conkling’s autocratic style, refused to return him to Washington.

Conkling “leaped from the Capitol, and there was no angel to bear him down unhurt,” The Washington Post editorialized. “His resignation was a complete disarmament.”

His Senate days were over, but Arthur, now president, offered him another position in Washington. In February 1882, without confirming that his former boss wanted the job, according to Greenberger, he nominated Conkling for a seat on the Supreme Court. The Senate hastily approved the nomination and then waited to see if Conkling would accept.

But Conkling had grown disillusioned with his onetime protege. The new president refused to put a Stalwart in charge of the Port of New York, prompting Conkling to dismiss Arthur “as a traitor and a coward,” Greenberger wrote. In early March, Conkling declined the court appointment in a letter to the president citing “reasons you would not fail to appreciate.”

As was often the case with Conkling, politics and personal pique had much to do with the decision. Arthur, his former patronage lieutenant, emerged as an unlikely champion of reform who would go on to sign the Pendleton Civil Service Act in 1883, dramatically curtailing the practice of giving government jobs to political supporters.

“Conkling’s letter of refusal was polite, but it was final,” biographer Donald Barr Chidsey wrote. “He and Arthur were no longer friends.”

Tue Mar 1 , 2022
Mazars said it had not, “as a whole,” found material discrepancies between the information the Trump Organization provided and the true value of Mr. Trump’s assets. But given what it called “the totality of circumstances” — including its internal investigation and Ms. James’s court papers — Mazars instructed the company […] 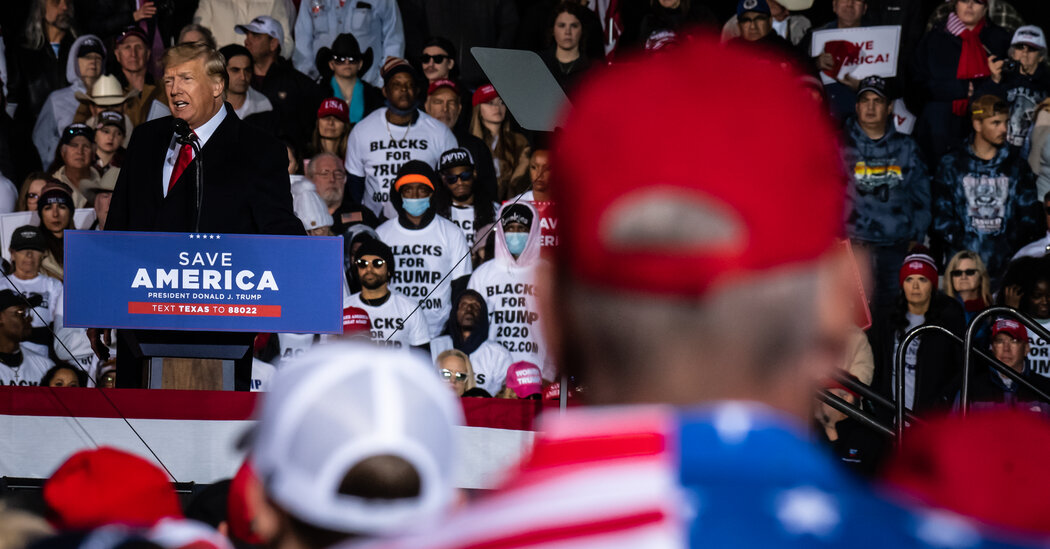