An anti-abortion activist rallies outside the Supreme Court on Nov. 1, as arguments about Texas’ abortion law begin. The court has allowed the law to remain in place for now.

An anti-abortion activist rallies outside the Supreme Court on Nov. 1, as arguments about Texas’ abortion law begin. The court has allowed the law to remain in place for now.

The U.S. Supreme Court on Friday refused for a second time to block a Texas law that has virtually brought abortions to a halt for anyone more than six weeks pregnant, a time so early that many women don’t know they are pregnant. Separately, the court dismissed as improvidently granted the Justice Department’s challenge to the law, meaning the court should not have accepted the case in the first place.

In a fractured opinion, four of the court’s conservatives–Trump appointees Neil Gorsuch, Brett Kavanaugh, and Amy Coney Barrett, plus Justice Samuel Alito left the providers a single tenuous route to challenging the law. Justice Clarence Thomas went further, saying that in his view, the providers could not challenge the law at all. And Chief Justice John Roberts, joined by the court’s three liberals, would have allowed a full throated challenge to the law to go forward.

Added all together, that boiled down to a vote of 8-1, with only Justice Thomas dissenting. But there was little agreement beyond that, with the conservative four making any continuation of the case nearly impossible, and the Roberts four strongly suggesting that the law is unconstitutional.

At issue in the case is S.B. 8, a law enacted by the Texas legislature to make constitutional challenges to the state’s newest anti-abortion law impossible. It was avowedly written as a way to skirt more than a half century of Supreme Court precedents establishing that the way to challenge the constitutionality of a state law is to sue state officials. So S.B. 8 removes enforcement of the state law from the hands of state officials and instead delegates enforcement to private citizens, empowering them to sue anyone who “aids and abets” an abortion after roughly 6 weeks, and putting a high price in damages for each abortion.

“If the legislatures of the several states may at will annul the judgments of the courts of the United States, and destroy the rights acquired under those judgments,” wrote Marshall, “the constitution becomes a solemn mockery.”

Underlining the point, Roberts added, “The nature of the federal right infringed does not matter. It is the role of the Supreme Court in our constitutional system at is at stake.”

University of Texas law professor Stephen Vladeck said he was “stunned” to see that Roberts could not get the court’s other conservatives to join such a basic premise of constitutional law. He called the decision “radical,” asserting that it “has incredibly ominous implications for the ability of federal courts to strike down state laws that interfere with our constitutional rights, and more importantly for the ability of those whose rights are violated to actually have their day in court.

“If you read the win for abortion providers here as some kind of positive sign in the Dobbs case, I think you’re deluding yourself,” she warns. ” Essentially what you see is the most conservative justices saying ‘it’s not Texas’ job to overrule Roe v. Wade. That’s our job and we’re going to do that job.'”

In the second case, the challenge brought by the Justice Department to force Texas to comply with existing abortion rights, the vote was also 8-1, but with Justice Sonia Sotomayor dissenting.

“The Court should have put an end to this madness months ago … It failed to do so then, and it fails again today,” she wrote.

Sotomayor said while she agreed with the court allowing the abortion providers to continue their challenges, she dissented “from the Court’s dangerous departure from its precedents, which establish that federal courts can and
should issue relief when a State enacts a law that chills the exercise of a constitutional right and aims to evade judicial review.”

She said the court, by its decision, “effectively invites other States to refine” the Texas law’s model “for nullifying federal rights. The Court thus betrays not only the citizens of Texas, but also our constitutional system of government.”

The court’s decision came just a little more than a month after hearing expedited arguments in the case, on Nov. 1. And it allows the abortion providers to return to District Judge Robert Pitman who previously blocked the law, saying it violated the constitutional right to abortion. Pitman had twice been stymied in attempts to examine the constitutionality of the law.

At the time the court heard the arguments, its decision to revisit its own actions from a month earlier seemed to point to a change in position. But those hopes were dashed for abortion providers who had asked the court to intervene a second time, coupling their appeal with the one from the federal government. The U.S. Justice Department contended it had the right to enforce federal constitutional rights, including the right to an abortion upheld by the Supreme Court for nearly a half century. The court disagreed.

Thu Dec 23 , 2021
Ed. note: This is the latest installment of The Legal Tech-to-English Dictionary, part of our Non-Event for Tech-Perplexed Lawyers. Jared Correia is the host of the Non-Eventcast. There’s a term for when attorneys use Latin and other arcane languages to describe legal processes to consumers: “legalese.” But there’s no similar term […] 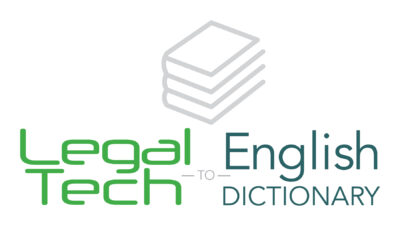