A leading law firm which represents some of the UK’s richest men and women is set to ditch ‘Dear Sir/Madam’ from its letters.

Withers LLP, which has offices around the world, including London, has urged its lawyers to stop using the traditional introduction in a bid to be more ‘gender neutral’.

It comes after one partner at the renowned law firm took to social media to campaign for an end to the use of the phrase ‘Dear Sirs’ on letters.

She said the phrase was ‘unnecessarily gendered’ and ‘dehumansing’ and claimed it ‘perpetuates discrimination and bias’.

Now lawyers at the firm, which promotes itself as acting for 70 per cent of people on the Sunday Times Rich List, have reportedly been advised to drop Dear Sir and Madam completely.

In an internal memo, seen by The Times, senior partners at the firm advise the traditional wording should be avoided.

Lawyers are reportedly being urged to use the name of the firm, company or partnership’ instead.

Withers LLP (pictured: Withers’ building in London), which has offices around the world, including London, have reportedly told its lawyers to stop using the traditional introduction in a bid to be more ‘gender neutral’.

According to the Times, the memo reads, ‘It is usually preferable to use the name of the firm, company or partnership . . . [as] this is increasingly seen as an acceptable form of address’.

It adds that ‘when writing to an individual, instead of Dear Sir/Madam, consider whether you could write to them by name’.

MailOnline contacted Withers for a comment. A spokesperson said: ‘We have guidance available to help people address their correspondence in the most appropriate way for the recipient, and they are free to adopt this if they wish.’

Meanwhile, The Lawyer, a business-to-business publication for law firm leaders, commercial lawyers, barristers and in-house counsel, said that Withers ‘did not want to be left behind as the profession moves towards the standard use of gender-neutral language’. 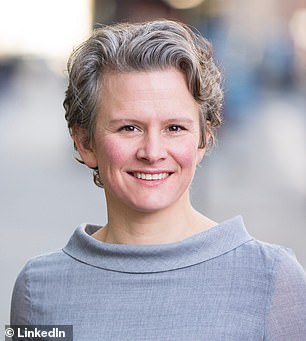 The move comes after Katharine Landells (pictured), a family law partner at the firm, said she wanted the profession to ‘move on’ from the tradition of using ‘Dear Sirs’ in letters

The move comes after Katharine Landells, a family law partner at the firm, said she wanted the profession to ‘move on’ from the tradition of using ‘Dear Sirs’ in letters.

In a post on Linkedin, Ms Landells wrote: ‘I spend a lot of my professional time writing letters – and it’s time to move on from “Dear Sirs”.

‘My job is all about navigating people through what is usually one of the most challenging phases of their lives.

‘Writing and receiving letters in a style from the 1900s doesn’t help my clients make positive progress.

In her post, Ms Landells also included an email in which she urged people to stop using ‘gendered’ language.

She said it seemed ‘particularly pertinent’ in the particular case she was working on because ‘the people working on this matter all identify as female’.

Some agreed with the post, with one lawyer, David de Mestre, writing: ‘A great example of respectfully communicating a boundary/need/preference. Thanks for sharing.’ 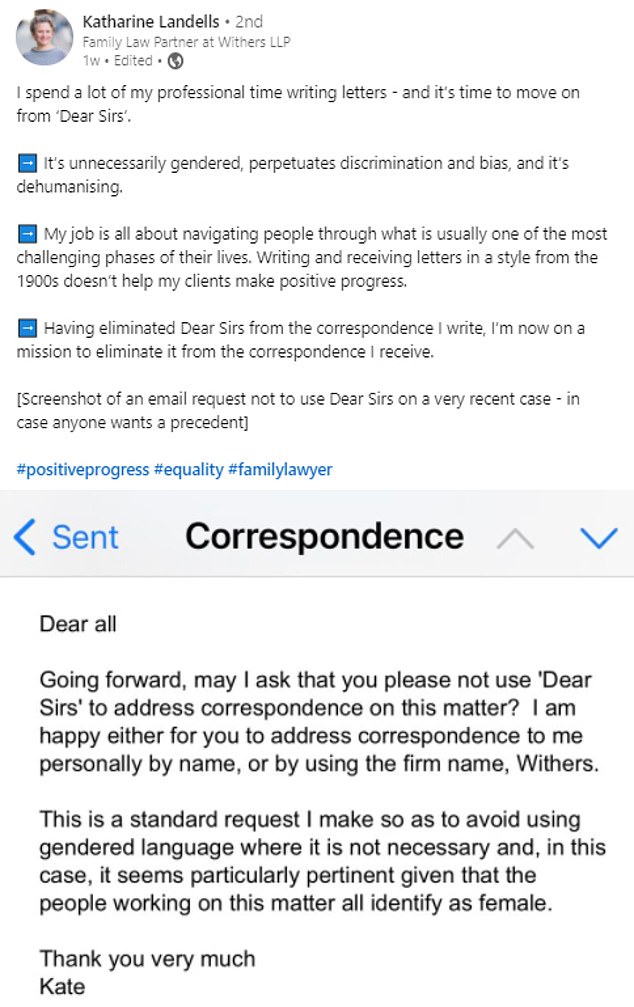 In her post, Ms Landells (pictured) also included an email in which she urged people to stop using ‘gendered’ language

However others disagreed, with one legal consultant, Jane Canham, writing: ‘A standard practice in litigation that I do not see as offensive in any way having practised for nearly 20 years I shall be sticking with “Dear Sirs” I am afraid.;

Others remained neutral on the point, but said the post had given them ‘food for thought’.

‘I have used “Dear Madam” when dealing with a female sole practitioner and did this without really thinking.

‘In a way when writing to another firm you are writing to that company but then I would not necessarily check the details of the directors.

‘Anyhow I am pleased to see this post and it has given me food for thought.’

It comes after Clifford Chance, one of the five so-called ‘Magic Circle’ firms, removed the greeting ‘Dear Sirs’ from its English language letter template last year.

And in December the firm announced it wanted to ‘eliminate’ so-called ‘gendered’ language across all legal templates.

As part of the firms change, pronouns such as ‘he’ or ‘she’ have been replaced with ‘they’ or ‘them’, and the use of the word ‘chairman’ has been banished. 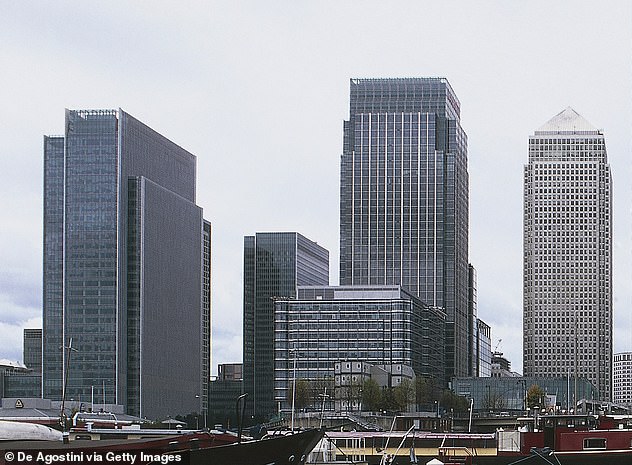 The law company said it had instructed LexPredict, a knowledge management business, to use artificial intelligence to identify and eradicate gender-specific terms in templates.

Tiernan Brady, the firm’s global director of inclusion, said: ‘The words and language we use matter greatly. They send a signal of our values and can have both a positive and negative impact on others and on our culture.

‘Removing gendered language from our communications is a subtle but impactful way of demonstrating what we stand for, and we’re delighted to see these steps taken in our firm.’