As the apocalyptic fallout of environmental degradation accelerates, there are two things we know for sure: the United States government will do very little about it, and companies will face mounting pressure to fill in that gap. Corporations have long enjoyed a responsibility pass, deploying environmentalism mostly as a public relations whitewashing — making consumers feel like it’s their fault for not recycling as opposed to the company’s fault for gutting stockpiles of natural resources and dumping industrial amounts of garbage on the other end. But we’re approaching the limits of those efforts, with an increasingly savvy corps of investors and consumers making decisions based on sustainability. And as environmental efforts take center stage, it’s going to become a top priority for legal departments to guide the company through these new challenges.

With that in mind, Ernst & Young’s EY Law group and the Harvard Law School Center on the Legal Profession interviewed 1,000 General Counsel and Chief Legal Officers from businesses representing 12 industries across 20 countries to get a sense of how law departments are responding to this challenge. The key takeaway is that lawyers see the looming problem and are trying to get on top of it. 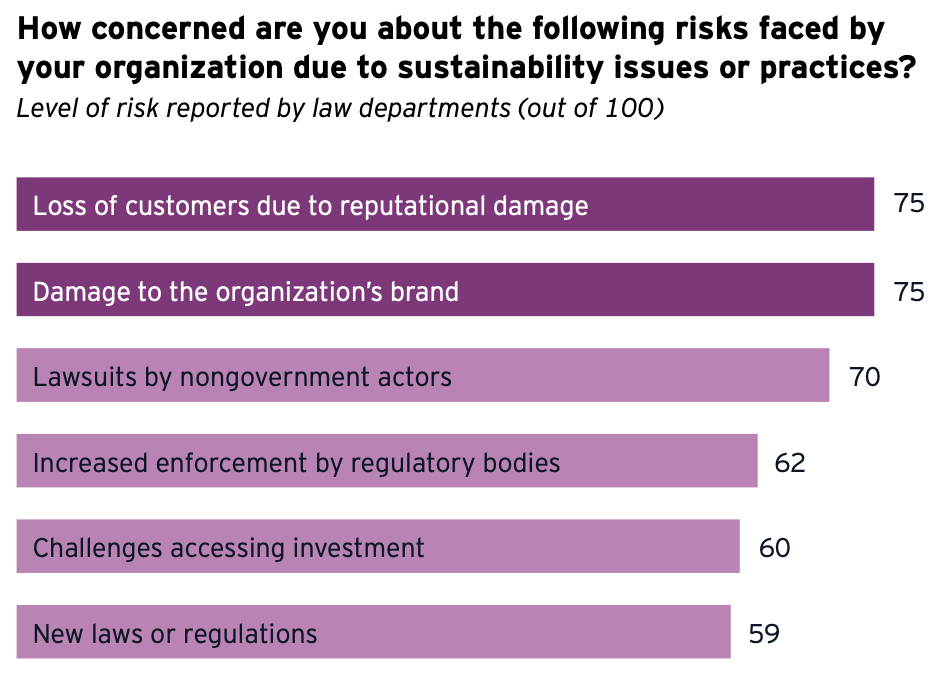 Note that the two largest areas of risk revolve around public perception of a company that falls down on the job of sustainability. BP took its hits after the Deepwater Horizon spill, but people still pulled up to their local pumps. Fast forward and lawyers aren’t as sanguine about the chances that the public will keep letting bygones be bygones.

That said, there’s a bit of a disconnect when it comes to who is currently bringing the pressure: 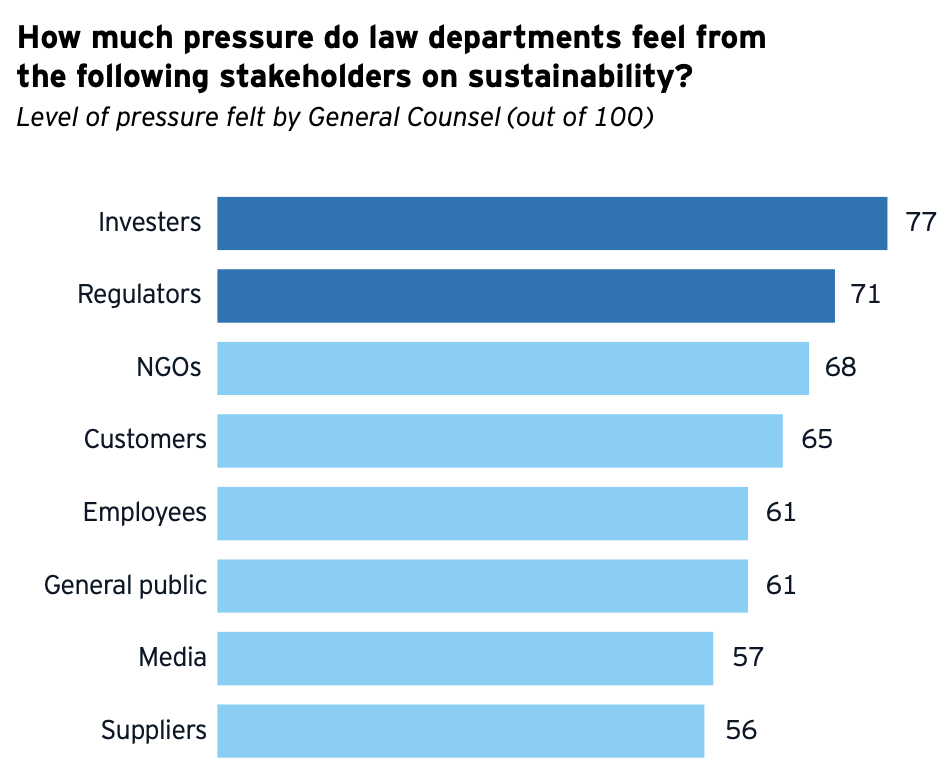 Because while reputational damage is the biggest identified concern, customers and the general public don’t get top billing in this chart. Even if the general public lashes out, the long-term threat is still — for now — felt on the investment side.

In line with this, the report found that most legal departments plan on expanding sustainability efforts over the coming years. Because this is where the risk is growing, especially with regard to regulators… by which we mean “regulators abroad” because obviously not in the United States.

Complicating the law department’s job in defining its role is the fact that many environmental and social activities are either collectively led or their ownership is split across various functional departments. As a result, close collaboration across the business is required to drive action and accountability. Law departments recognize this need, with 61% of General Counsel reporting they expect to increase collaboration with the business on sustainability.

But that disconnect between legal and the rest of the business leadership needs to get smoothed out. While 69 percent of GCs said that social goals are “clearly defined,” a mere 22 percent said the same of the entity’s environmental goals. Can’t really balance financial and environmental goals when most companies can’t agree on what those goals even are.

That’s where some consulting can help make the difference. As you might suspect, EY Law offers that help. But no matter how a company chooses to address the problem, it’s coming and it’s going to land on the general counsel’s plate. It’s best to get proactive about it before it’s too late.

Joe Patrice is a senior editor at Above the Law and co-host of Thinking Like A Lawyer. Feel free to email any tips, questions, or comments. Follow him on Twitter if you’re interested in law, politics, and a healthy dose of college sports news. Joe also serves as a Managing Director at RPN Executive Search.

claims of legal confusion over AZ abortion laws are unfounded